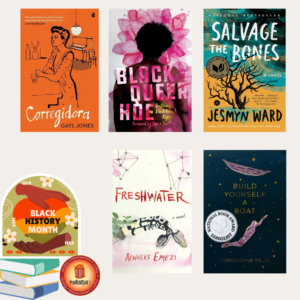 Gender-based and sexual violence are not specific to any race, religion or community. Yet studies show that in the United States, African American communities are most impacted by gender based violence in the United States. Black survivors also disproportionately experience barriers and other negative outcomes.

The literary genres in this list range from novels to poetry; and address varied and complex stories of Black life. The stories tell the hard truth of oppression** (see TW; box), but also show us how resilience, love, and family help us resist violence in all its forms.

Gayl Jones’ Corregidora was assessed by Toni Morrison as a book that changed Black women’s writing forever. An exploration of the trauma of enslavement, the generational relationships between Black women, and the search for love, Corregidora lays out the intimate, unescapable connection between racism and gender-based violence.

Black Queer Hoe has a mission, and within the first few poems Britteney Black Rose Kapri accomplishes it. This book is an ode to people who are marginalized, stereotyped, and shaped into figures instead of seen for who they are. Kapri’s work sees its audience (Black queer hoes) with eyes open, accepting all the sad, angry, messed up pieces along with the good.

Salvage the Bones is a book about family, about land, and about survival. The story tracks a family before and during Hurricane Katrina, weaving a moving and emotional portrait of Southern Black life. The book underlines the precarity of being a girl in its main character, Esch, but the reader is also left with a sense of her power and strength.

Build Yourself a Boat was longlisted for the National Book Award in 2019. A work by poet Camoghne Felix, the book explores themes of “Black female pain, empowerment, memory, and discovery,” as Morgan Parker writes in her blurb. Felix’s writing is simple but never bleak, focused on the trauma of working through pain and the healing of coming out the other side.

Akwaeke Emezi is an author whose books are an entire universe. Freshwater tells the story of Ada, who has many other selves living inside her. The book explores the tension between Nigerian spirituality and the rigidity of Western science, centering the importance of mythology and the enduring strength of old gods. Emezi’s critiques of Western constructs of gender, mental health, safety, and personhood are nothing short of necessary.

Bonus: “When Black Men Drown Their Daughters” by Patricia Smith